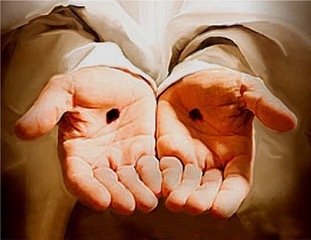 This past Easter weekend, the New York Times published an opinion column by Peter Wehner. I have never heard of the author and usually don’t look to the “Times” for devotional input - but God’s Voice is heard from surprising sources. The article was entitled, “Why is Jesus still Wounded after the Resurrection?” It’s a good question.

The resurrection of Jesus was not simply a replacement of the life He lost. It was a translation of His Spirit and Body into a glorified state. It seemed as if He had super powers! Jesus appeared in a room without using the door. He could mask His identity and vanish in a moment. He could float on the wind and rise before befuddled believers. Since we understand resurrection as a divine improvement of what was - we assume it to be perfection. And perfection it is; but perfection with scars.

The glorified Body of Jesus still had the wounds of crucifixion. Jesus invited Thomas to touch the gash left by nails. Thomas didn’t put his hand on the slash of a Roman spear - but he could have. Jesus carried in His Body the imprint of suffering and death. And He still does. In the Apocalypse, John sees Jesus standing by the Father’s throne, “As a Lamb having been slain.” (Rev.5:6) Jesus carries His wounds even still. Why?

Is it simply memory? Are the souvenirs of death meant as a reminder of what Jesus went through for us? I am sure they are, but I am also sure that they are more. Wehner interviewed scholars, theologians and pastors to answer the titled question. The diversity of their answers coalesced into a single theme. The scars of Jesus are empathy. They speak not only of what happened to Him, but of what happens to us. Everyone is wounded in this life. It’s meaningless to try and compare scars. Pain is pain and no one is immune. To every broken heart, mind, body and spirit, the marks of His suffering announce that He understands ours. The grief of our life finds a place in the heart of our Lord. Our wounds are met by His. The fact that they are eternal, declares that His compassion never fails.

In the new heaven and earth, death will be absent. Cruelty, hostility and violence will not enter. Sorrow, grief and regret will be unknown. After a time, even the memory of pain will fade as an echo of what used to be. But look at Jesus. On His head, the punctures of a thorny crown. On His back, the tracks of a lash. His hands and feet bear the print of nails. His side is marred by a gouge. The evidence of His abuse is unmistakable. They are not for pity, nor for remembrance of something long past. They are an eternal pronouncement of God’s grace. His heart is touched by ours. His mercy floods our misery. Even when there is no more pain - the proof of His tender love continues for ever.