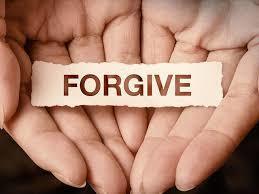 I have had to forgive my father. Without getting too detailed, our relationship lacked any emotional connection and its challenges fell outside the norms of many father/son relationships. I must quickly add, that I had to seek forgiveness as well as extend it. But frankly, more was extended than was received. That created a struggle for me that was both emotive and theological.

The heart struggle I faced was not in offering forgiveness, but to sense or feel that forgiveness actually happened. I verbalized forgiveness to my dad and prayed it persistently to my heavenly Father. Yet, there were moments and days when past pain created hurt and regret. It didn’t make sense to me. If I had truly forgiven my father, then the pain and anger would disappear. So I thought. I believed that since the ache remained, my forgiveness was not authentic. It took a theological lesson to address the heart scars.

Jesus teaches us to forgive multiple times! For discussion, let’s round off His answer to 70 (Matt.18:21,22). We assume that Jesus meant for us to forgive 70 times for 70 offences - once for each offence. (Obviously a very bad day!) But it may also mean that there is one offence that needs forgiveness 70 times. In other words, instead of assuming that forgiveness is a one time act, it may be an act that we have to frequently revisit. That does not mean the initial forgiveness is phony or insincere. It does suggest that our hearts have to catch up with our heads.

When we choose to forgive someone, we release them from our anger, judgement or vengeance. But our emotions are not as fast as our wills. It takes time for us to feel free of the natural emotional reactions. Forgiveness is a single act - but it is also a commitment. I commit to remember the decision to forgive. I commit repeatedly to release the offender. I commit repeatedly to forsake my anger. The repetition of my commitment doesn’t reflect poorly on my choice to forgive or the quality of forgiveness extended. It does give space for my heart to agree with my choice. My heart grows into agreement with my head. Over time and repeated commitment, the heart finds peace.

If this sounds like psychological gymnastics, think of the cross. The Father has forgiven us through the one time sacrifice of His Son. God made a choice to forgive. I made a choice to believe. Of course there are times I don’t feel forgiven. But I return to the choices made. My emotional turmoil is addressed by returning to what has been done. My heart is shaped by the grace that’s already been given. By returning to the grace of forgiveness already granted, God adds even more grace - peace.