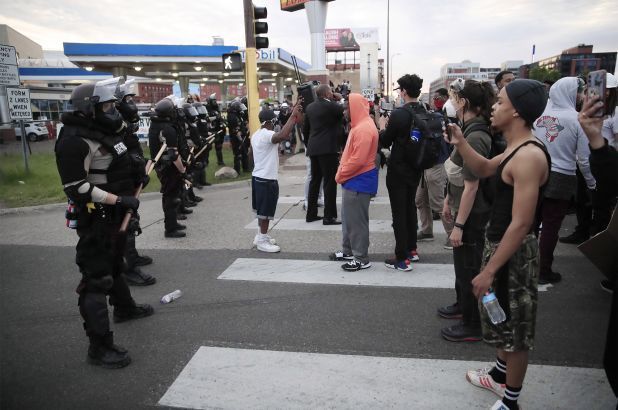 Power and privilege are rarely recognized as such by those who have it. These advantages are considered normal, deserved or taken for granted by the entitled. They become the lens by which perspective is shaped to see the world. This seeing becomes a form of blindness. That is our problem. It is powerfully displayed by the events of this week.

A black man died under the knee of a police officer. The deceased was thought to be passing a counterfeit $20 bill. Whether the man’s actions were intentional or not - it is no cause to die for. Four officers pressed him into the pavement until he was unresponsive. Then, they pressed him even longer. The officers were fired and one held for murder. But, even this accountability could not hold back a national public outpouring of furious frustration. There are riots in dozens of cities of various sizes and make ups. There are protests of silence, signs and songs. There are looters burning and stealing. There is deep anger, many tears and devastation of property, livelihood and peace. There has been death from protests of death.

I am a white male Canadian who is untouched by the realities of urban riots, racial strife and abuse by the police. I see the news and hear the comments of those who share my status. I note that many have been angered by the violence and destruction of the riots.  Some call for an aggressive stance and argue for justice for business and property owners. And it’s true - mindless anarchy calls for justice. But calls for justice against rioters must not surpass the need for justice towards the oppression which has sparked this. It is only out of our privileged blindness that we call for the one and ignore the other. Until we recognize and resolve the issues of abuse which are foundational to the current strife, we will face repetition of the events. We will bear guilt for it.

Lest you think I am being too political, may I remind you of Jesus’ response to the arrogant abuse of religious authorities in His day? (Matt.23) He called out their abuse and described them as blind guides rotting in unmarked graves. They used power to cling to power. They used their weight to press people into the dirt. Was every scribe or Pharisee guilty? No. But, the whole was responsible for the few.

It’s easy to allow the text to remain historic or theoretical. But true exegesis of the passage demands that we must consider the need for justice today on every level. The voice of God’s prophets raised against oppression is not outdated. We must be their echo. But we need to do more than shout. We must listen. Listen to the voices of the oppressed. Listen to those who’ve been systematically held down. Listen to the history of abuse committed by privileged powers. Perhaps by listening, the ray of God’s truth will pierce our blindness. May there be peace for all.

Jul 19
Turn the Other Cheek